Another step toward mainstreaming nonviolence
by Ken Butigan | February 12, 2011, 11:47 am

The movement that ended President Hosni Mubarak’s thirty year autocratic rule not only has created a spectacular breakthrough for Egyptian democracy, it has bequeathed a priceless gift to the rest of us in every part of the planet.

For eighteen days the Egyptian people carried out an unarmed revolution with determination, creativity, and a daring willingness to risk.  They marched, they improvised, they prayed, they connected with one another.  Most of all, they stayed put—and invited the nation to join them.

Faced with a corrupt and dictatorial police state, such a movement might have been tempted to wage armed struggle. Instead, they reached for, experimented with, and remained largely steadfast about another way: nonviolent people power.
END_OF_DOCUMENT_TOKEN_TO_BE_REPLACED

Come celebrate the Power of Nonviolence!

*We are delighted to have Martin Sheen join Medea Benjamin as honorary co-chair. Though Martin  is currently out of the country, and cannot guarantee his presence, he'll certainly be with us in spirt.

By David Hartsough  —  in Iran  —  November 10, 2010
At Persepolis we had several unusual and very significant conversations.

We met the Ambassador from the Netherlands. He said he was very happy to see our American delegation here in Iran trying to help build some peace and understanding between our countries. He said he felt that what is crucial in helping find a solution to the “Iran conflict” is pretty simple. What the Iranian people and the Iranian government are asking for is respect and to be treated fairly and justly. They have an amazing history and culture and we need to treat them as we – any country – would want to be treated.
We encountered about 35 Iranian soldiers in uniform. Accompanying them was an Imam with a white turban. We told him about our belief that all religions have as their basic beliefs and teachings to Love One Another and we are all children of one God. He agreed that love for one another is the essence of all religions, but that we cannot rely on God to bring about a just and peaceful society. We must be God’s instruments to help bring about a more peaceful and just society and referred us to the text in the Koran which says just that.
END_OF_DOCUMENT_TOKEN_TO_BE_REPLACED

Another FOR Civilian Diplomacy Delegation left the United States for Iran, on November 5th. Today, Monday, November 8th, the delegation of 11 U.S. peacemakers visited the Peace Museum of Tehran. The following reflection from John Schuchardt shares highlights of their experience at the museum.
We have been able to have a few conversations with Iranians in the streets, usually including observations such as “I like Americans but I don’t like that your government is taking severe measures.”
Today a man spoke, probably for most of humanity, when he said, “I would love to live in a world where people don’t kill each other.”
The Tehran Peace Museum is set in the environs of a large, beautiful park, with a large statue of peace in honor of the victims of chemical weapons used by Iraq in it’s desperate 8 year war with Iran, a war which is estimated to have killed 500,000 on each side.
END_OF_DOCUMENT_TOKEN_TO_BE_REPLACED

By David Hartsough  — May 10, 2010
I had the wonderful opportunity to participate in the 50th reunion of the Student Nonviolent Coordinating Committee (SNCC), April 15-18, 2010, in Raleigh, NC.  Over 800 SNCC workers, their families and friends came together for four days to remember, reflect, share stories, inspire a younger generation, and strategize about how to continue the important work that SNCC students started 50 years ago.   END_OF_DOCUMENT_TOKEN_TO_BE_REPLACED

Active Nonviolence in Palestine and Israel

When people think of Palestine and Israel, they often picture Palestinians as suicide bombers and terrorists while the Israeli military are seen as bombing whole neighborhoods in Palestine.  The violence and counter-violence and endless war has created a hopelessness about any peaceful future for the Holy Land.

However, during a month-long stay in Palestine and Israel recently, I found something else.  I found something very positive and hopeful and perhaps the key to a peaceful resolution of this tragic conflict — and a possible path toward a peaceful future for both peoples.

END_OF_DOCUMENT_TOKEN_TO_BE_REPLACED

My Visit to Gaza with the Gaza Freedom March

On the first anniversary of  the War on Gaza, known as Operation Cast Lead, close to fourteen hundred people from more than 40 countries came to Cairo, Egypt planning to go to Gaza and help end the Siege, a total blockade which began in 2007 and continues today. Unfortunately, under extreme pressure from Israel and perhaps the United States, the Egyptian government did not allow most of us to enter Gaza. However about ninety from the GAZA FREEDOM MARCH did get into Gaza from Dec. 30, 2009-Jan 2, 2010.  I was privileged to be part of that group.
END_OF_DOCUMENT_TOKEN_TO_BE_REPLACED

Letter from Cairo from Peacemaker Delegation

It is New Year's Day evening. The moon is really full over Tahrir Square in front of The Mogamma; it is beginning to feel like the Gaza Freedom Marchers' place.  We have done nonviolence training there, kicked off the march from points along it's perimeter and across from it, celebrated New Year's Eve and welcomed in a year of greater promise, and closed this phase of the journey together there.

At the closing circle I treasured seeing the chief of police who has followed us throughout the week with hundreds of his young conscripts (who I now affectionately call our "boys in black") enter our large circle, ostensibly to do crowed control; he ended up accepting a proffered cookie, leaving with a smile on his face……Small steps in the path toward world peace and understanding, based on sharing our humanity.

END_OF_DOCUMENT_TOKEN_TO_BE_REPLACED

The Cairo Declaration of January 1, 2010

We, international delegates meeting in Cairo during the Gaza Freedom March 2009 in collective response to an initiative from the South African delegation, state:

END_OF_DOCUMENT_TOKEN_TO_BE_REPLACED

A delegation of 20 American peacemakers planned to visit the much maligned nation of Iran in late February. Only six received visas. Among these were David Hartsough and Franciscan Fr. Louie Vitale. They returned brimming with fondness, hope and heartening stories.

David, the delegation leader, is a long time Quaker peacemaker who worked with the American Friends Service Committee for 18 years and co-founded Nonviolent Peace Force, an international project that places trained nonviolence workers in conflict situations. He currently directs Peaceworkers, an organization that supports nonviolent movements around the world.

END_OF_DOCUMENT_TOKEN_TO_BE_REPLACED

Loving Our Enemies: The People of Iran

Members of the delegation share their reflections on their recent trip to Iran.

In this post are essays by Ann Morrell, Bill Gillen, and Jack Schultz. Ann wrote about what she describes as the highlight of her trip, a connection she made with a group of schoolgirls in Esfahan (see above photo):

We were descending the steps on the way out of the Palace of the Forty Columns in Esfahan. We only saw twenty columns because the large reflecting pool was drained and instead of the shimmering reflection of the twenty columns, we saw workmen patching the sides of the pool. It was a beautiful sunny morning in a lovely park. On the steps were so many teenaged girls talking together in clumps that I surmised they were on a school trip.

END_OF_DOCUMENT_TOKEN_TO_BE_REPLACED

Flag-waving in Iran and the U.S.

Today's news from Capitol Hill highlights an issue of deep concern to those who seek to build stronger relationships between the United States and Iran. Senator Jon Kyl (R-AZ) submitted a proposed amendment to a bill on an omnibus appropriations bill in the Senate. The amendment would prohibit all U.S. agencies from doing business with companies with any business ties to Iran's energy sector. The Friends Committee on National Legislation argued in a summary of a letter that FCNL faxed to every U.S. senator last night:

END_OF_DOCUMENT_TOKEN_TO_BE_REPLACED

3/2/09 Meeting with Iranian Vets and People from Hiroshima

Submitted by David Hartsough on March 2, 2009

Here's an update from our delegation leader David Hartsough:

Father Louie Vitale and I met with a group of Iranian war veterans from the Iran-Iraq war (1980-88) and a delegation from Hiroshima, Japan. Some of the vets had lost their legs; many had been attacked by the chemical weapons used by Saddam Hussein against the Iranians and have been suffering the consequences ever since.

There were widows who had lost their husbands, men who could barely see with one eye, people who could not breathe when someone started to smoke, and many from Hiroshima who had lost so many of their relatives and loved ones.
END_OF_DOCUMENT_TOKEN_TO_BE_REPLACED 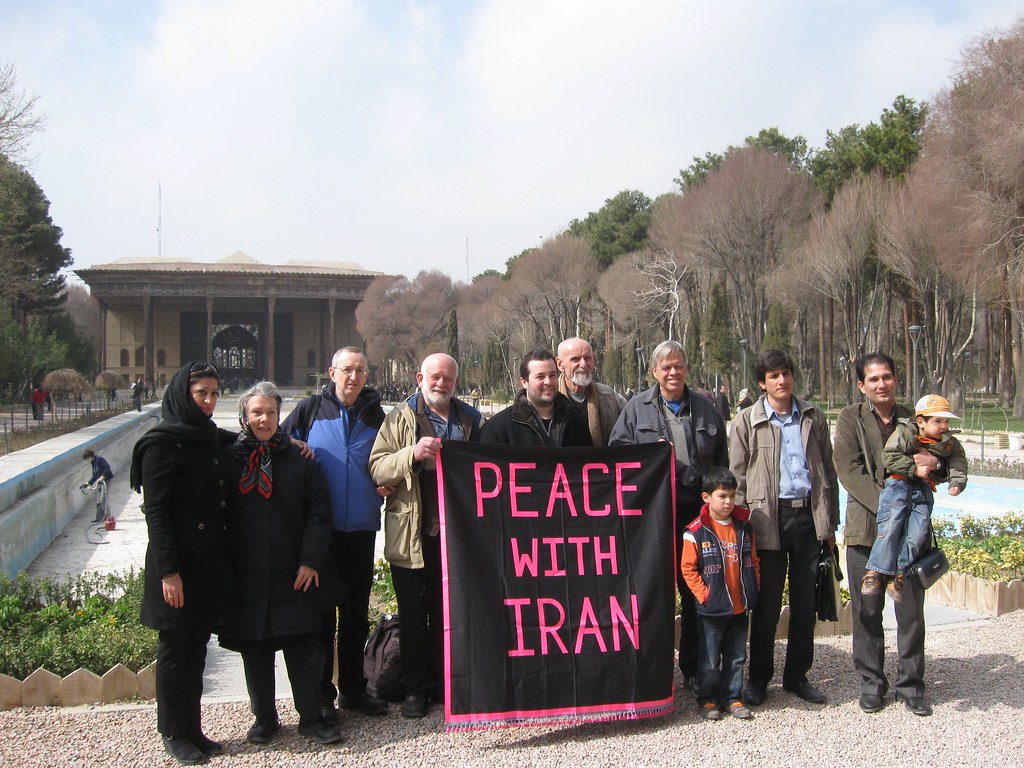 Submitted by Ethan Vesely-Flad on February 28, 2009

Several more reports have arrived in the past 48 hours from the Fellowship of Reconciliation's 9th civilian diplomacy delegation to Iran. Earlier this week, the group flew south from Iran to Shiraz, and they have since traveled to the ancient, mighty ruins of Persepolis as well as the gorgeous city of Esfahan. Delegation leader David Hartsough wrote two short reflections from this city of rivers, known to all Iranians as "half the world." His first, "Don't Bring Your Guns," is both a humorous and political commentary: END_OF_DOCUMENT_TOKEN_TO_BE_REPLACED

The Fellowship of Reconciliation's ninth peace and civilian diplomacy delegation to Iran arrived safely in Tehran on Thursday, February 19th, 2010. There are six members of this delegation, making it the smallest one to date, as two-thirds of the group were denied visas. FOR is deeply concerned about what we are experiencing as an increasing series of challenges to an already difficult process of obtaining visas for U.S. citizens.
END_OF_DOCUMENT_TOKEN_TO_BE_REPLACED